Home Blog How Shopify is shifting the eCommerce landscape

How Shopify is shifting the eCommerce landscape 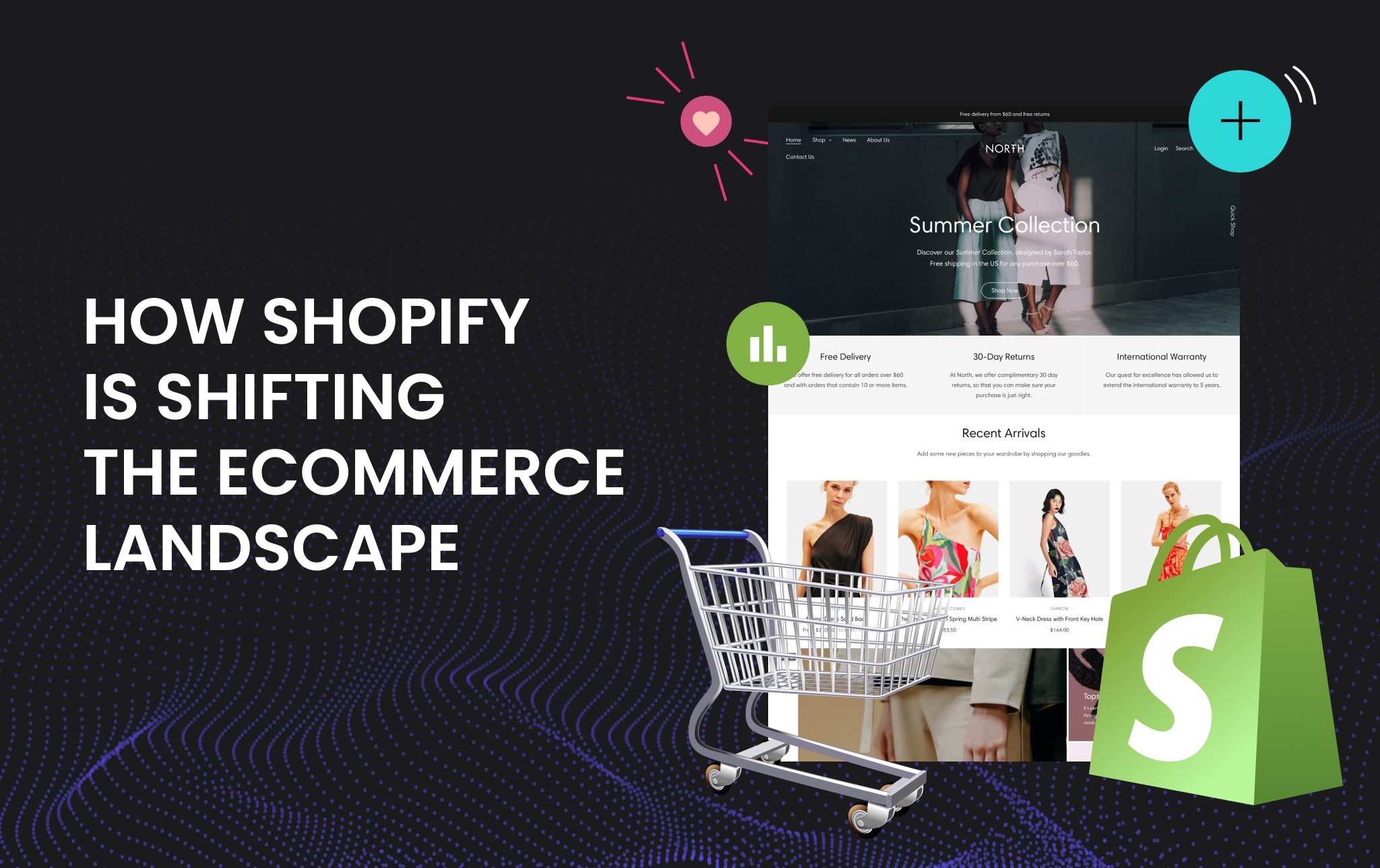 Can you imagine life without online shopping? No, I suppose. Whatever you need now, you can buy on the internet and get delivered to your door in the next few hours. The global pandemic and lockdowns around the world gave the eCommerce industry a tremendous boost.

Now, when most countries end lockdowns and return to normal life, people continue purchasing on the internet. They’ve gotten used to the convenience and the ease of online shopping. As a result, online sales are expected to continue rising. 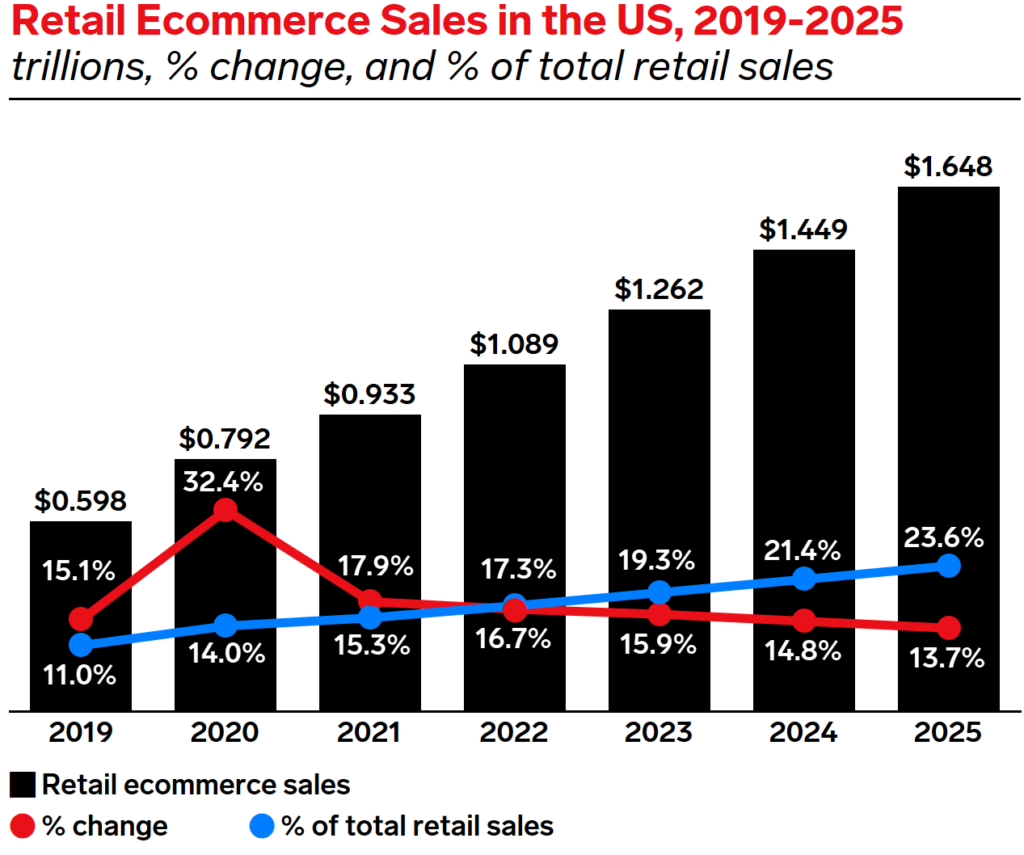 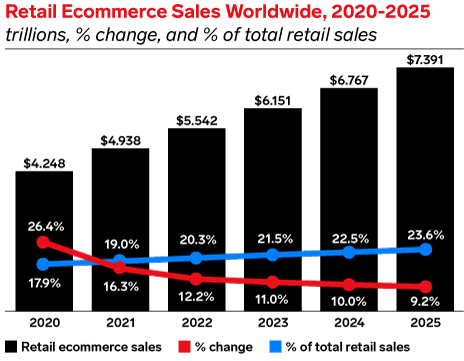 But what are the key growth drivers in the world of online shopping? If the global pandemic is the primary reason for eCommerce growth, marketplaces are the primary means.

Online marketplaces like Amazon, eBay, and Alibaba aggregate sellers and facilitate shopping from different sources. This allows buyers to select from the widest and the most complete range of products at the best price offers. No wonder, marketplaces are becoming so popular.

B2C online sales via marketplaces are forecast to increase by a 14% CAGR to USD $4.7 trillion by 2025, with marketplaces capturing a 61% share of total B2C sales.

Amazon is the leading online marketplace, with 5.2 billion monthly visits.

C2C marketplaces, where a consumer sells directly to another consumer, are on the rise too. eBay — the indisputable leader in the field — expects its revenue to grow by 6% in 2023. The C2C business growth is driven by millions of people who spent time during COVID-19 lockdowns clearing out their wardrobes and selling unwanted clothes and other goods online.

China and the United States are the world’s top eCommerce markets. Together, they brought in $3.6 trillion in eCommerce sales in 2021, which was more than 73% of the total world retail eCommerce sales generated worldwide. It’s therefore not surprising that top eCommerce companies — Amazon, Home Depot, Alibaba — come from these two countries.

Currently, there seems to be a change of leaders in China’s market. Pinduoduo, a seven-year-old eCommerce platform that turned discount shopping into an online game, might be overtaken Alibaba as the most popular marketplace. The Wall Street analysts feel optimistic about Pinduoduo at 204%, while Alibaba at only 33%. However, only time will tell the winner of this race.

Ecommerce platforms as alternatives to marketplaces

However, there’s an alternative to marketplaces — eCommerce platforms. They allow businesses of different sizes to operate online retail and build a direct connection with their customers without the intermediary of a marketplace. Both models have their pros and cons.

Platforms like Shopify, BigCommerce, and Magento are in great demand worldwide. Just to compare: Amazon, the biggest marketplace, has increased its gross merchandise volume (GMV) by 59% in the last two years, while Shopify, one of the leading platforms, has generated three times higher sales — 148%.

eCommerce platforms are not inferior to marketplaces in terms of functionality. They don’t only allow merchants to set up and manage a store, rank in search engines, and buy ads, but also to arrange the shipping of products, sell financial products, and offer fulfillment services, as does Shopify.

Why Shopify is an eCommerce monster

Bill Gates said: “A platform is when the economic value of everybody that uses it, exceeds the value of the company that creates it. Then it’s a platform.”

That’s true about Shopify. The platform’s sales volume across all merchant stores is $43 billion in 2022, a 16% increase over last year.

World-renowned brands such as Tesla, Hasbro, Procter and Gamble, and Polaroid use Shopify to power their businesses. No wonder, it’s the number one platform in the US with a market share of 31% among all websites that are using eCommerce technologies. At the time of writing, there are almost 4 million websites around the world built using Shopify.

This makes it a big player in the eCommerce market and one of the main contributors to its growth.

But what makes Shopify a monster of eCommerce is the global network of solution developers for Shopify App Store and Shopify Theme Store. The company has done much for them. As from August 2021, they charge zero commission on developer’s first million in revenue to give them more earning potential.

Shopify believes this step will result in a drop in company revenue, but says it doesn’t expect this impact “to be material” because it will encourage greater innovation and bring benefits to the company in the long run. With more than 7,000 apps on the Shopify App Store, Shopify develops a reliable ecosystem in which a myriad solution providers and merchants can grow together. The strategy should help Shopify get ahead in the eCommerce landscape.

In the coming years, Shopify is expected to be one of the major growth drivers of the eCommerce revolution. As businesses fight it out in the competitive online market, Shopify would continue to power millions of stores across the world, despite the current slowdown.

There are several key directions that have the most promising growth potential.

Despite the lifting of COVID-19 restrictions throughout the world, the eCommerce market is expected to expand rapidly. Shopify market forecasts don’t look so great now as the company’s stock has recently tumbled, but it’s too early to be worrying about this. Many eCommerce giants, including eBay, Etsy, and Wayfair see a decline in their earnings now due to the end of lockdown and returning to brick-and-mortar stores. However, online shopping is here to stay, modified, innovative, and more user-oriented.

And you don’t have to worry about that since we follow the latest trends and carefully consider our clients’ specifics and business needs. For this reason, we’ve been named one of the top 10 eCommerce development agencies in Illinois by DesignRush.

Being a Product Marketing Manager at SpurIT, Alex is advising entrepreneurs and industry professionals about best practices and the latest trends in eCommerce, retail, and marketing.